I'm currently learning CSS through Josh Comeau's excellent course, CSS for JS. Each module has workshops/exercises that we work through. Each of these is a git repository on GitHub. My workflow has been to fork it and make changes on the fork. But looking at my GitHub repository page shows these as standalone repositories, which feels cluttered to me.

So I wanted to have a workflow that enables me to:

To do that, especially around point 2, I ended up using git grafts and git-filter-repo. Continuing down this path has a few caveats:

What I ended up doing

Upon reflection, point 2 doesn't matter to me as much as I thought. I don't need the git history of the upstream repos.

That means, in my repo course-css-for-js,

Git Grafts is what git offers us to change the parent of a commit.

Then fetch changes from RepoA and merge them into main branch

Move these into their own subdirectory, commit, and push to remote.

Ensure that you also push the grafts (found in https://stackoverflow.com/a/42457384)

When cloning the repo, do:

To make the local repo always fetch grafts (in case someone else has pushed a new graft to the remote repo), add the following to .git/config

To graft more repos, I needed git-filter-repo. Read https://github.com/newren/git-filter-repo#how-do-i-install-it to install it, meaning:

Then run the following to modifying commit not to delete files

Push all grafts to remote

Difference in grafted vs non-grafted commits

Running gitk shows the commits that have been grafted 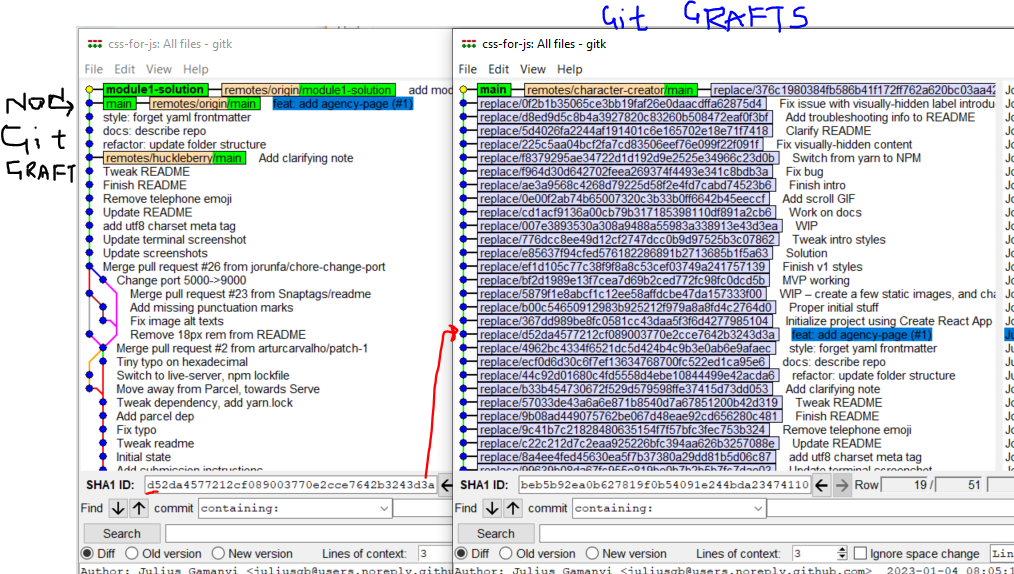 Use .gitattributes to control the line endings for files that are in the repository. The above settings are useful when working with oth...